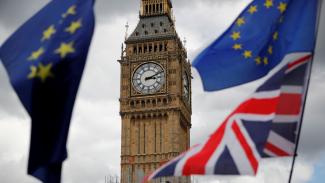 The British exit (Brexit) from the European Union (EU) was back in the news on Tuesday, after the British Parliament voted against British Prime Minister Theresa May’s proposed Brexit deal. This was not the first time lawmakers rejected a proposal put forth by May’s government; however, the proximity of this vote to the March 29 deadline to withdraw from the EU was cause for concern.

The drama continued throughout the week. In what amounted to a rather confusing Wednesday, lawmakers voted on their willingness to move forward with a “no-deal” Brexit (NDB) as an alternative to Prime Minister May’s plan. Although there is a measure of support for an unconditional withdrawal from the EU, many fear that such an act could have devastating consequences for the domestic economy, and could have a far-reaching impact on the economies of the EU’s member states as well. Prime Minister May hoped to leverage the possibility of a NDB vote in order to stir up support for her own plan. However, most lawmakers opted to eliminate the option to vote for a voluntary NDB, thereby weakening the Prime Minister’s hand. Nevertheless, this did nothing to address what will be a forced NDB on March 29 if a proposal is not approved or if an extension is not granted.

In an effort to buy more time, lawmakers gathered again on Thursday to vote to extend the impending deadline until the end of June, suggesting that such an extension would give party leaders more time to negotiate with their counterparts. It also would coincide with parliamentary elections in May, which could influence the outcome of the Brexit vote. This measure was approved by Parliament, but also must be approved by the EU commissioners, who have expressed frustration over the unfolding of events in the UK. Prime Minister May hoped to bolster the likelihood that her European counterparts would accept the extension request by framing it as conditional upon Parliament’s voting in favor of her Brexit plan as early as Wednesday, March 20. Such a vote would mark the third time that British lawmakers gathered to vote on the Prime Minister’s proposal. We will see how it all plays out in the days to come.

The ongoing saga of the Brexit negotiations began with the historic referendum that took place in the UK on June 23, 2016, and the subsequent triggering of Article 50 of the Lisbon Treaty on March 29, 2017, which initiated the UK’s withdrawing from the EU. Since that time, Prime Minister May’s government has struggled to navigate the murky process, suffering a number of resignations by cabinet members as well as a no-confidence vote in January of this year.

Despite the political stalemate of the past two years, the British stock market has continued to rise alongside other developed markets. The June 23, 2016 referendum introduced some volatility to the FTSE 100, which dropped approximately 3.15% and 2.55% on the two subsequent trading days, hitting a low of 5,887.70 before rallying above 7,000 in October of that year. The FTSE 100 has since fluctuated around that milestone, nearly breaching 8,000 in January and May of 2018 before declining to its present value of 7,185 as of Thursday’s market close.

Although the British pound depreciated significantly following the referendum on June 23, 2016, falling from 1.4879 GBP/USD on the day of the referendum to a low of 1.1452 GBP/USD in October of 2016, the price has since stabilized around the 1.30 GBP/USD level, with an average price of 1.2916 GBP/USD over the trailing six-month period.

With the March 29 Brexit deadline only two weeks away, we are entering into a crucial time. The deal being proposed by the Prime Minister has its drawbacks, but its proponents argue that it will do more to safeguard the British economy than would an unconditional withdrawal from the EU. Opponents of the deal counter by saying the Prime Minister’s negotiations still leave the UK inextricably tied to the EU, a condition that voters rejected in the referendum of 2016.

This divide is unlikely to be bridged in the next 14 days. Perhaps now that voters have had the opportunity to see the best that their politicians can do for them on a proposed departure from the EU, it may be time for these same voters to be given another say on the matter.