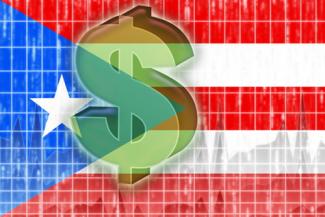 Two years ago this September, we wrote in our weekly review about the state of the Puerto Rican economy post Hurricane Maria. It seems apropos this week to provide some updated context amid an unfortunately worsening situation that recently has developed on the island. Puerto Ricans flooded the streets of San Juan this week to protest a government many of them see as dishonest and even scornful toward the island’s people. A corruption scandal combined with the release of profanity-filled, homophobic, and misogynistic messages from a group chat that included Governor Ricardo Rossello and his inner circle, targeting political adversaries, proved enough to bring simmering tensions to a boil. The botched response to Hurricane Maria, followed by austerity that has closed more than 100 schools and slashed budgets, created a volatile situation intensified by these recent scandals and highlighted the demand for change.

As we approach the two-year anniversary of Maria, the economic situation in Puerto Rico is becoming increasingly dire. Today, nearly 30,000 of the island’s citizens remain homeless, and its critical tourism industry has all but crumbled. Amid last week’s protests, Royal Caribbean Cruises diverted two of its ships from the island, accounting for about 8,000 passengers and an estimated $650,000 in lost spending. And although Congress has allocated more than $42 billion in aid to Puerto Rico, the funds have come in slowly, exacerbating an already appalling set of circumstances.

To illustrate what caused the current situation, tax breaks on the island dried up during the past couple of decades, and the Puerto Rican government initiated new bonds backed by a sales tax to support the island’s aging infrastructure. However, the island now owes more than $70 billion to bondholders, a result of mismanagement and a dwindling tax base. Additionally, as recently as 2017, the median household income in Puerto Rico was less than $20,000, with about 40% of residents living in poverty. By comparison, the median income in the mainland US was about $60,000 in 2017, and only about 12% of residents lived in poverty. Then the hurricane hit in 2017, which killed roughly 4,500 people and caused $95 billion in damage. To make matters worse, as of May 2019, the unemployment rate on the island is dismal—close to 9% compared with less than 4% in the mainland US. This has caused a spike in migration from the island to the mainland US. Amid this migration, the economic gap between the wealthy and the poor has widened: Many of the island’s middle class have fled, whereas the poor have been unable to leave, and the wealthy (who were shielded from many of these problems) have stayed. This clearly has only intensified the tensions on the island territory.

Amid this complex financial situation, protesters also are demanding a variety of policy changes to prevent corruption, diminish the influence of lobbyists, provide greater media transparency, and audit and reduce Puerto Rico’s massive debt load. However, late Wednesday night, Governor Rossello announced his resignation via a taped video published on Facebook. This clearly is a relief to Puerto Ricans, but unfortunately, it comes with its own problems. By law, the island’s secretary of state would succeed Rossello, but since that position is currently empty, Justice Secretary Wanda Vazquez is next in line. However, Vazquez is seen as loyal to Rossello, and there already have been calls for her to resign. Furthermore, it seems this transition has no impact thus far on the fiscal control board that has been accused of mismanaging the island’s debt for years. This confusing and uncertain passing of the torch provides little comfort to Puerto Ricans, and raises questions about what policy changes ultimately will result.

Although these recent developments come as no surprise amid a worsening situation, the frustration that is currently boiling over into the streets of San Juan is easily understandable. And it seems that despite these protests that may spur much-needed reforms, Puerto Rico’s economic woes have a limited path toward improvement, leaving the fate of the island unclear at best. We can only hope that Puerto Rico can rectify this truly awful political and economic situation.