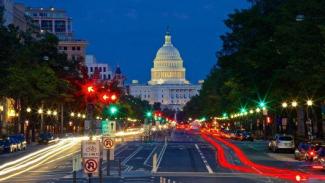 Last week’s midterm elections ended total Republican control in Washington , as the Democrats regained control of the House of Representatives. With some significant help from a skewed Senate map, in which Democrats and their allies had to defend 26 seats against the Republicans’  nine, Republicans held onto (and almost certainly increased) their majority in the Senate, pending the results of elections in Florida and Mississippi. This gave President Trump enough reason to claim victory in this election as he fended off a complete ‘Blue Wave .’

Historically, the president’s  political party tends to lose congressional seats in the midterm elections, because the opposing party is more motivated to get out and vote. However, this time it was different—both  parties produced an increase in voter turnout. In the weeks leading up to the election, the President pursued a strategy designed to shore up support amongst his base. President Trump campaigned with other Republicans on the ballot and tried to focus voters’ attention on immigration and border security issues, which are controversial between the two parties. The President’s comments around stopping a caravan of migrants, many of whom  he claimed are ‘gang members and some very bad people,’ and his actions of moving an additional 5,200 troops to beef up border control proved to be a wedge issue for both sides. Additionally, the highly polarized Judge Kavanaugh (now Associate Justice) hearings likely contributed to centrist Democratic senators’ losses in red states in the Midwest.

The controversial administration and set of issues at stake led to the largest voter turnout in a midterm election since 1966, according to early estimates from the United States Election Project, as more than 48% of eligible voters cast their ballot versus only 36.7% in 2014. With more than 113 million people voting this year, the turnout is actually closer to what we see in presidential years (i.e., 139 million people voted in 2016) versus normal midterm years. Voters were more energized than we have  seen in a long time, as many important seats around the country were in close races, and people were determined to make a difference in the face of strong opinions about the President. According to the Washington Post, in at least 13 states and in some counties, including Travis County, Texas, more people voted during these midterm elections than in the Presidential race in 2016. This impressive turnout highlights the continued polarization of America.

Not only are voting Americans becoming more divided, but so are the politicians who represent them. Republicans  in Congress are becoming more conservative, and Democrats are leaning further to the left, as the battle between love and hate of the controversial President creates two sides, which are less inclined to compromise. A split-party Congress tends to operate in gridlock, which should make for interesting policymaking during the next two years. Much of President Trump’s agenda most likely will face a stalemate within Congress; however, the increased Republican majority in the Senate should allow an easier road for the President to appoint conservative judges to the bench.

Despite any roadblocks, when looking at history over the last 60 years, a split-party Congress actually tends to be the best scenario for the stock market. The average cumulative gain during each two-year election cycle tallied 18.7% when there was a split Congress, versus only 17.3% when there is unified control between  the President and Congress. In fact, ‘Gridlock is good’ has been the saying when linking politics to the stock market. Perhaps it is because nothing is done or undone, and politics is not  getting in the way of stock market gains. It remains to be seen whether that maxim will hold this year. On the downside, the trade war rhetoric out of Washington puts pressure on global economic growth and business confidence. Additionally, growth may slow in the face of a split Congress, as it will be harder for Republicans to pass additional fiscal stimulus policies, such as tax cuts or increased spending. However, this may induce the Federal Reserve  to be less hawkish with its  interest rate hikes, which should take some pressure off of the appreciating US dollar and act as a tailwind to equity markets. Regardless, much remains to be seen in this presidency, with many wild cards still to come, as the political landscape in the US has intensified over the past several years, and the US equity bull market seems to be closer to the end than the beginning.