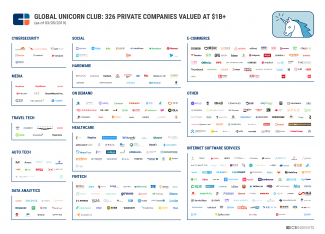 March of the Unicorns?

Unicorns are mythical creatures, whose sightings are supposed to be rare, but they are spotted in herds these days, especially their initial public offering (IPO) on Wall Street. If the hype from Wall Street becomes reality, 2019 could be a blockbuster year for the IPO market, with more than $100 billion in new market capitalization expected. However, several of these companies, including those that went public (like Lyft, Pinterest, and Slack, to name a few), are either yet to turn profitable or have reported minimal profits. This may cause investors to wonder: Could this mad rush to go public be a leading indicator for recession as the private investors in these companies seek to cash in their chips?

Apart from mythology, a unicorn, in investment parlance, is a startup company with a current valuation of more than $1 billion, which is privately owned and backed by venture capitalists. This term was first coined in 2013 by Aileen Lee, founder of the venture capital firm Cowboy Ventures. She referred to unicorns in that way to emphasize how rare these firms are, as only 39 of them, among thousands of startups at that time, could achieve that status. According to industry watcher CBInsights, as of January 2019, there are around 340 unicorns across the globe, with a combined valuation of $1 trillion. Nearly half of them (around 160) are based in the US, totaling nearly $600 billion in value, the highest aggregate value ever recorded. Tech startups form the bulk of these firms, as they have benefited largely from the technology paradigm shift involving smartphones and cloud computing. Relying on disruptive innovations and consumer-focused offerings, these firms have turned traditional businesses into more technology-oriented services.

The 2008 financial crisis left a devastating mark in the US, but it also created opportunity for those who were ready to capitalize on the steady growth that the economic recovery generated. The period of near-zero interest rates following the Great Recession led to the venture capitalists’ increased pile of cash. This cash surge has contributed to venture capital’s year-over-year growth since 2008, with a colossal record of $132.1 billion invested in the US in 2018, according to Pitchbook Research. This gush of dry powder, a slang term venture capitalists use when referring to cash reserves, has boosted the valuations of the startups, especially in the last few years, when the rate at which these firms turned unicorns tripled. Many of these unicorns have resisted the idea of IPOs, even after multiple rounds of funding and reaching maturation with multi-billion in revenues, embodying the unicorn’s mythical ability to resist capture or taming. However, their recent lineup to go public when the private market industry is exhibiting enormous growth could cause investors to question whether it is a result of unicorns’ herd behavior.

Before we debate the timing of their public appearance, a look at the unicorn IPO market since 2016 reveals a significant increase. In 2018, 20 unicorns went public compared with 13 in 2017, whereas the overall increase since 2016 has tripled. Their public debut was met with mixed results, as some went on to become instant hits while others lost heavily. Snap Inc., which went public in 2017 after much fanfare, lost around 48% of its market value in the next six months following its IPO. However, with big tech startups like Lyft, Slack, and WeWork going public, and a slew of big names, including one of the largest unicorns by valuation, Uber, in the pipeline, 2019 promises to be a blockbuster year for IPOs.

As market pundits have come up with interesting theories to explain the rush of unicorn IPOs, the most commonly agreed-upon viewpoint is that high current market valuations provide the ideal opportunity for a grand exit by venture capitalists. Adding to this is the attractive step up in valuation that companies have seen after they have listed their IPO. Another factor is that because most of these tech startups rely on high cash burns for their growth, the investors are probably impatient to get a return on their investments. Many of these big startups have yet to report any profits; instead, they are running with huge losses, in sharp contrast with prior years’ IPO rushes, in which the majority of firms going public were either profitable or had a visible path to profitability. Nevertheless, there is a big difference between the tech startups of the dot com era and now, as the current crop consists of much larger and more established firms. In the past cycle, the business models were more about promises of future revenues, whereas many companies today already have those revenues but their future profitability may be uncertain.

With a seesawing stock market coupled with trade tensions with China and many other countries, eminent signs point to a slowing global economy. It is uncertain how these tech startups will behave should another market downturn occur, as most of these firms originated after the global financial crisis. Unicorns have generated a definite buzz in the market, and the consensus is that the economy’s bull run may be on its last leg. Therefore, if a bear market occurs, stock market investors may lose their appetite for these loss-making unicorns and cast a long shadow over the ones that are coming after. The last time we had such a heavy IPO rush was in 1999 and 2000—the years preceding the dot com bubble. As these large unicorns march towards the IPO door, investors should tread cautiously and invest with their eyes wide open.