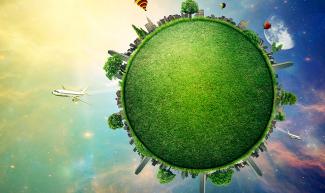 Green Shoots in the Bond Market

In September, scientists from the National Oceanic and Atmospheric Administration (NOAA) announced that in 2018, Earth’s atmospheric concentration of carbon dioxide (CO2) averaged 407.4 parts per million (ppm). According to NOAA, this represented the highest concentration of CO2 in the atmosphere for at least the last 800,000 years—longer than anatomically modern humans have existed. The increasing prevalence and intensity of droughts, fires, and other severe weather events resulting from the rising concentration of CO2 and other greenhouse gases have led to increasing pressure on governments and other organizations to address the crisis. For roughly the past decade, a humble solution for financing a carbon-free future has been sprouting in the global debt markets—the green bond.

Although limited bond issuance to finance clean energy projects in the US did come to the municipal bond market in the early 2000s, the World Bank lays claim to the title of first green bond issuer. Hot off the heels of the 2007 Intergovernmental Panel on Climate Change (IPCC) report, which cited humans’ fossil fuel consumption as the driver of climate change, Swedish pension funds engaged with the World Bank and the Center for International Climate and Research (CICERO) to explore investing in climate change solutions. In 2008, the World Bank issued the first-ever green bond to fund projects aimed squarely at climate change mitigation and adaptation.

One green shoot quickly burst into many. Governments, supra and subnational agencies, development banks, and private organizations have issued more than $580 billion in green bonds through 2018, according to Bloomberg New Energy Finance, though estimates vary, given the heterogeneity of the market and differing qualifying criteria. As of September 2019, the Climate Bonds Initiative (CBI), a nonprofit entity working to promote climate solutions via the bond market, has reported another $216.4 billion in issuance, eclipsing 2018, with a full quarter to go. The CBI estimates that more than half of the green bond market’s proceeds have financed renewable energy projects such as solar and wind. Clean transportation, building efficiency, and sustainable agriculture and forestry initiatives have benefited from green bond financing as well.

Although the utility of these projects and the need to fund them are clear, green bonds are not without controversy. The continued lack of a universally accepted standard in green bond definitions has led to ambiguity and disputes about the reputability of some green bonds, like those of China’s Three Gorges Corporation, which is not exactly known for its environmental friendliness. “Greenwashing” has come to describe some entities’ pursuit of the positive PR associated with a reputation for sustainability, if not necessarily its reality. The environmental intensity of both Spanish oil company, Repsol, and Russian aluminum producer, Rusal, for example, aroused some controversy. Mindful of this, organizations such as the International Capital Markets Association (ICMA) and the European Commission (EC) have striven to define more clearly what it means to be green, while a substantial verification industry has arisen to facilitate reporting and accountability. Nonetheless, strong and rising demand for anything with a verdant hue has outstripped supply, particularly in the euro-denominated bond market, where recent oversubscription to green bonds is higher than their “vanilla” counterparts, despite the higher reporting costs associated with going green.

With strong interest in these instruments and a massive funding gap to meet the United Nations’ Sustainable Development Goals, both the demand and the necessary projects do not seem to be going away. Despite the headwinds of reporting, compliance, and some less-than-scrupulous market participants, the green bond market has proven to be a crucial funding mechanism for governments, the private sector, and nonprofit organizations working to address the climate crisis. With green bonds comprising only a minute fraction of the roughly $102.8 trillion global bond market, the market’s saplings still have plenty of room to grow into sequoias.