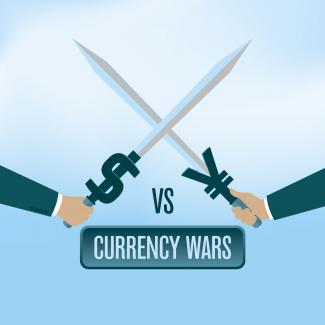 Game of Currencies: The Yuan Further Flames the Trade War vs. US

A U.S. Treasury release on August 5 designated China as a currency manipulator, after the yuan/dollar ratio fell beyond the key seven-to-one threshold, further worsening the US-China relationship. This was coupled with President Trump’s tweet the same day confirming China’s “currency manipulation,” escalating the trade war to an even higher plane. These actions resulted in Wall Street suffering its worst day of the year: The S&P 500 Index plummeted 800 points, with the 3% decline wiping out more than $700 billion of US equity market value. Although it has been widely speculated that the People’s Bank of China (PBOC) allowed the currency to weaken to lessen the impact of the next round of US-imposed tariffs, this actually is not the first time the Chinese administration has intervened in the currency market since the 2008 Financial Crisis.

China, in its defense, has pledged not to interfere in the yuan’s valuation, even though the PBOC blamed the currency depreciation on the market’s reaction to a fresh round of US tariffs. Whether the yuan has become the new ammunition in China’s arsenal to launch a counter assault to the US declaration of a trade war, or its depreciation is an outcome of market forces, it is of concern to investors. To be labeled as a currency manipulator, China should have 1) an annual $20 billion bilateral surplus with the US; 2) an overall current account surplus above 3% of its gross domestic product (GDP); and 3) demonstrate a pattern of persistent, one-sided intervention in foreign exchange markets to depreciate its currency. Remarkably, with a surplus of $29.9 billion as of June 2019, China meets only the first criteria.

Even though market participants have long been verbally attacking China for its role as a currency manipulator, why is the number seven suddenly spooking investors and the U.S Treasury? Although the seven-dollar-per-yuan ratio is largely random and not part of any policy measure, China has set a precedent of keeping its currency above that floor due to potential psychological impact.

In 2014-2015, when China saw that its growth was slumping more than it had expected, and its economy grew at the slowest pace in 24 years, it cut interest rates, pumped money into the stock markets, and devalued the yuan. After the 2015 stock market turbulence, Beijing shocked global financial markets by again devaluing its currency, which resulted in the largest one-day loss for the yuan in two decades. Then in 2016, when the currency faced severe depreciation, the PBOC spent more than $107 billion of its foreign reserves in a single month to keep the yuan above the seven-per-dollar level.

For many decades, China was considered to be a command economy, in which the central government is paramount in making policy decisions. Even with China’s shift to a mixed economy in 1978, the government’s input and influence on its economic decisions cannot be understated. So why are US investors now so startled at China’s intervention in managing its own currency? A few reasons may justify the concern. First, depreciating the yuan gives China an undue competitive advantage with its exports. Additionally, China owns roughly 27% of US government debt held by foreigners. Thus, any change in the Chinese administration’s policies to alter its foreign exchange reserves can have major implications for the US debt markets and, in turn, the US economy in terms of lending and mortgage rates. Finally, if Chinese authorities believe that the yuan is too weak, it can sell U.S. Treasurys and use the dollars received to buy its own currency, creating havoc with global interest rates.

However, playing with U.S. Treasury instruments should be China’s last resort. China knows full well that selling Treasurys might put downward pressure on the dollar, making Chinese products less competitive in global markets. To add to China’s woes, dollar-denominated debt held by Chinese firms is now more than $1.5 trillion, 20% higher than it was in 2015, so a depreciating yuan exposes China to even greater currency risk.

Despite many developing countries moving from the age old fixed-rate exchange system to the more market-determined floating-rate one, coupled with expansionary fiscal policies, China has strategically adopted the managed floating-rate regime, largely dependent on the US dollar, because of the US’s largest-trading-partner status. It is interesting that in November 2015, the International Monetary Fund (IMF) awarded the yuan the status of a reserve currency, and the IMF is initiating a shift to peg it to a basket of currencies to make it a global currency.

If the PBOC did intentionally engage in competitive devaluation of the yuan, does that indicate that China has gone on the defensive due to an economy that is struggling on multiple fronts? China’s GDP growth recently slumped to the lowest level in 27 years, industrial production grew at its lowest rate since 2002, and retail sales are falling and trending below expectations. It also may be just another line of attack in an already complex and rapidly declining trade situation with the US. However, in an age of global economic and financial markets integration, many experts agree that major countries, especially superpowers like China and the US, should devote their resources to rebuilding confidence within the markets rather than resorting to protectionist measures such as currency devaluation and tariff hikes.