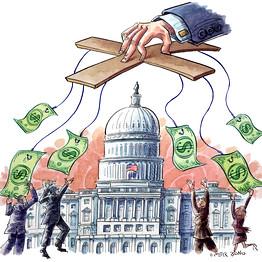 Calm Markets or Return of Volatility: Politics in Focus to Start 2019

2019 has begun with mixed macroeconomic data, but the market thus far has responded favorably, especially when compared with the sharp sell-off in equities in late 2018. The Manufacturing Purchasing Managers Index (PMI) fell to 54.1 from 59.3, its lowest reading since November 2016, signaling a downturn in manufacturing growth. This was followed by a steep fall in Treasury yields that touched their lowest levels since late January 2017. Markets reacted positively to Federal Reserve Chairman Jerome Powell’s statement that it will be patient in hiking interest rates and will be sensitive to market sentiments. This reversed the earlier impression from his December statement that the central bank's balance sheet wind-down was on ‘autopilot.’ Additionally, the nonfarm payroll data was positive, as 312,000 net new jobs were added in December, which beat expectations, and wage growth increased by 3.2%.

As we embark on 2019, some major political events are worth a deeper review, as they likely could shape markets in the coming months.

Brexit: March 29, 2019, is the day of reckoning for the UK, as it prepares to leave the EU after two years of negotiations on the nature of its planned exit. After cancelling an earlier vote on the deal planned for December 11, British Prime Minister Theresa May will table in Parliament the draft withdrawal agreement that had been negotiated between the UK and EU, which then will be put to a vote for approval on January 15. The deal is supposed to provide the UK a transition period and allow for a soft exit from the EU. If the agreement that the Prime Minister has negotiated with the EU fails to pass the House of Commons, the UK will leave with no deal at all. A ‘no deal’ Brexit, as it is commonly referred to, means that British businesses and the public must brace for a harder exit, as there would be no transition period. Both the EU and UK have ramped up contingency plans for a ‘no deal’ Brexit, as rejecting the deal is seen as the more probable scenario. Article 50 of the Lisbon Treaty is the formal plan for any country to leave the EU, allowing the UK a two-year time frame for negotiations, which ends on March 29, 2019. Extending the Article 50 period as a way to avoid a ‘no deal’ Brexit in the short term also is being discussed. That result would require the UK Parliament’s approval and the agreement of all 27 other EU member states. With so many permutations and combinations, Brexit is a political drama that the markets will be watching closely in 2019.

US-China Trade relations: 2019 has begun on a positive note for the US-China Trade relationship. Midlevel American and Chinese officials wrapped up three days of negotiations on Wednesday. The talks largely were believed to have progressed significantly, as can be seen by the markets’ positive response to their extension. This has raised hopes of higher-level talks on the sidelines of the World Economic Forum in Davos later this month. This week's meetings in Beijing are the first direct talks since President Donald Trump and his Chinese counterpart, President Xi Jinping, agreed to a 90-day ceasefire in the trade war when they met on the sidelines of the G20 Summit in Buenos Aires. The truce will end on March 1, 2019, and if there is no breakthrough in talks by then, the US is likely to raise tariffs to 25% from 10% on $200 billion worth of Chinese imports. In 2018, the US imposed trade tariffs on steel, aluminum, and several other Chinese imports worth billions of dollars, and restrictions were placed on investments. These sanctions were designed to address intellectual property theft and other alleged unfair trade practices by China. All this resulted in the highest level of trade conflict in the last three decades. A protracted trade war in 2019 between the US and China, which contributes more than one-third to global Gross Domestic Product, can have an adverse effect on both countries as well as other world economies.

Government Shutdown: The partial shutdown of the US government that began on December 22 has entered its third week. The shutdown, which affects more than 800,000 federal workers, is now the second-longest in US history, and is the result of the US Democratic-led Congress’s failure to appropriate funds for the proposed wall on the Mexican border. President Trump and the previously Republican-led Congress had asked for $5.7 billion to fund border security, and when the new Congress did not agree, he retaliated by refusing to sign legislation to fund the government, which technically led to the shutdown. Credit rating agency Fitch has warned that the US is in danger of losing its ‘AAA’ credit rating if the shutdown continues.

Increased geopolitical concerns, such as the US-China trade war and uncertainty around Brexit, along with domestic factors, such as raising US interest rates, produced increased market volatility at the close of 2018. Although the beginning of 2019 has been relatively calm thus far, the three political events highlighted above could either escalate volatility or further calm the markets. Only time will tell which of these outcomes is reached, but one thing is certain: Politics is certainly in focus as we begin 2019.