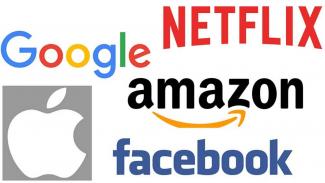 Have Domestic Equities been De-FAANG’d?

Oh how the mighty have fallen…or have they? FAANG, an acronym that represents five of the most popularly traded Information Technology stocks, including Facebook, Apple, Amazon, Netflix, and Google (whose parent company is Alphabet), generally sets the tone of the domestic equity markets. Looking at attribution for large cap growth managers, over and underweights to these stocks in many cases have influenced the returns of their investment portfolios relative to their peers and benchmarks. In our current season of earnings releases, Information Technology stocks have garnered much of the financial headlines, and the FAANG stocks are no exception. To recap what’s led to the increased volatility, consider these stocks’ recent earnings announcements:

So although earnings season started rather choppily for tech stocks, positive news from Apple, Amazon, and Google balanced out the results. However, this brings about a broader discussion on the sector. In 2017 and the first two quarters of 2018, this segment has vastly outperformed the broader market, and, in those same time periods, growth stocks have led their value counterparts. This doesn’t come as much of a surprise, considering how the current market environment has benefited riskier styles, such as growth stocks and the FAANGs, in particular.

However, considering the volatile start to the third quarter for this cohort and the Information Technology sector as a whole, can we expect to see a slowdown from tech’s heavy hitters, or a rotation where value stocks overtake growth stocks’ dominance in the markets? Recent performance conflicts with that notion. From the beginning of the third quarter to this past Wednesday’s close (8/8), the S&P Technology Select Sector Index has outperformed the S&P 500 Index by 69 basis points, and the Russell 1000 Growth Index has outperformed the Russell 1000 Value Index by 95 basis points. So for those investors who think that a changing of the guard is coming, they still might have to wait awhile.

It’s also worth noting the sway the Information Technology sector holds over the broader markets. When looking at the market capitalization of the constituents in the S&P 500 Index, four of the five FAANG stocks reside in the top ten, with Netflix being the only holdout. When examining the S&P 500 Index (the Index) by sector weightings, the tech sector accounts for nearly 26% of the Index. This is far and away the largest sector within the Index, and a bigger slice than the smallest six sectors combined. By comparison, the next largest sector is Health Care, at 15%.

This has become a bit of a nuisance for S&P Dow Jones Indices. So much so, that as of last week, it was announced that Facebook, Google, and Netflix would be making a move from the Information Technology sector to the new Communication Services sector, beginning September 21, 2018. The Communications Services will replace the Telecommunications sector, and will include a mix of stocks from both the Information Technology and the Consumer Discretionary sectors. The aforementioned FAANG stocks will be joined by the likes of Disney, CBS, and Comcast to create somewhat of an eclectic grouping.

So have domestic equities been de-FAANG’d? At this time it’s hard to see an end to investors’ insatiable appetite for large cap technology stocks. Even Warren Buffet has been getting in on the tech trade, with his $180 billion Berkshire Hathaway portfolio invested in nearly $48 billion worth of Apple stock. It’s difficult to say with conviction if or when the FAANG stocks, the Information Technology sector, and growth stocks will yield their leadership in the markets. If they do, it could signal larger issues with the economy beyond tech or growth stocks falling out of favor.