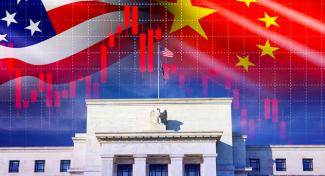 The Treasury’s yield curve inversion headlines, and the bad omen it signals about the state of the economy, dominated the news cycle last week. On Wednesday, Thursday, and Friday, the yield on the benchmark 10-year U.S. Treasury Note dropped below the 2-year yield. The scrutinized bond-market spread, when inverted, is seen by many market participants as an important recession signal, though the timing of the eventual downturn is less predictable. The last five yield curve inversions eventually have led to recessions. Some economists have argued that the current low yields and recent yield curve inversions in the US have more to do with the suppressed and negative yields in other parts of the world than with the conditions of the US economy.

Recession fears have indeed grown in recent weeks, fueled by slowing global growth, intensifying trade tensions between the US and China, and mixed economic data in the US. In the last few weeks, US corporate profits were revised down by $200 billion, as were employment numbers, which were revised lower by 500,000 jobs between March 2018 and 2019. The Markit Flash Manufacturing PMI Index dropped to 49.9 this month, falling below 50 for the first time in about 10 years. Consumer and small-business optimism have fallen as well, and two out of five economists surveyed by the National Association of Business Economists now expect the economy to slip into a recession this year or next.

Acknowledging the rising fears of a slowdown, President Trump’s rhetoric shifted notably from a position of “no recession” over the previous two weeks to the “possibility of a recession” warranted in order to fight China. Early in the week the President confirmed that to stimulate the slowing economy, he was considering “various tax reductions,” including a payroll tax cut and indexing capital gains taxes to inflation, although he later retracted from this position. Some analysts believe that the warning of a possible recession could be a sign that the President is preparing the US for a long trade fight with China.

Could indexing capital gains taxes to inflation and reducing the payroll tax help to shield the US economy from the current global slowdown and trade war threats? Economists’ opinions are split on both issues. According to some, indexing capital gains taxes would do very little to actually spur economic growth. Because a capital gain is the profit from the sale of securities or real estate, it is generally the very wealthiest of taxpayers who derive the bulk of their income from capital gains profits on investments. Indexing capital gains to inflation, therefore, would favor higher-income individuals, as the largest increase would benefit only the top 1% of taxpayers, and by just 0.83%, according to the calculations performed by the Tax Foundation. Proponents of indexing capital gains argue that the proposal would unlock trillions of dollars in capital if it were implemented. Analysts at Strategas estimate that doing so would be the equivalent of a 45% tax rate reduction, and that small companies would benefit most from these cuts.

Similarly, the supporters of a payroll tax cut maintain that it could help offset the impact of the tariffs that are set to go into effect in September and again in December. They believe that a payroll tax cut is good for growth and would help in the face of the slower global growth patch. Millions of Americans pay a payroll tax of 6.20% on their earnings, a levy that is used to finance Social Security programs. The payroll tax was last cut in 2011 and 2012, to 4.20%, in the Obama Administration, as a way to encourage more consumer spending during the Great Recession. But the cut was allowed to reset back to 6.20% in 2013. According to some economists, the 2011 payroll tax cut had little impact on growth and consumption, and they expect a payroll tax cut would have little effect on business confidence this time around. Business confidence has slumped since the tariffs were imposed beginning in mid-2018, and capital expenditures have dropped as a result. Interestingly, a simulation by the Urban-Brookings Tax Policy Center shows that a 2% cut in payroll tax would benefit 121 million workers; however, nearly three-quarters of them would be high earners in the top fourth and fifth quintiles. To conclude, the cost of such a measure would be enormous for the government coffers, at a time when the annual budget deficit is expected to approach $1 trillion soon.

It seems for now that the Trump Administration has placed the additional tax cuts on the back burner and is handing the torch to the Federal Reserve (the Fed) to enact more monetary stimulus. However, by not giving a clear sign that the rate cut is coming during his address at the Jackson Hole meeting last Friday, Fed Chair Jerome Powell disappointed the current Administration’s officials who were hoping for a more aggressive Fed stance. As Fed Chair Powell confirmed, monetary policy may not be enough to counteract President Trump’s trade policies, which are fueling uncertainties and posing risks to the US economy. Whether this fact will make the current Administration reconsider its war on China remains to be seen. As of last Friday, the odds looked really low.