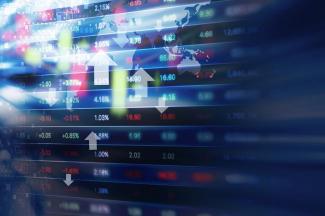 Emerging markets stocks have declined significantly thus far in 2018, after a solid rally last year that led to the asset class’s best return since 2009. After reaching highs in late January, the space has slumped nearly 20%, stoking fears of further downside and potential contagion. The sharp pullback has caused many investors to question their commitment to emerging markets. Should they be worried, or is this pullback to be expected, given the historical volatility of the asset class?

First, it’s important to understand the causes of the current decline. A strengthening dollar, tightening US central bank policy, and increased geopolitical tensions and trade rhetoric are contributing to the current weakness. Last year, emerging markets were buoyed by a weak dollar, but this year’s reversal has had the opposite effect. As the US has gradually tightened monetary policy, several currencies, including the Turkish lira, Indian rupee, Argentine peso, and South African rand, have steeply declined against the dollar. Years of cheap borrowing costs have led to significantly higher costs for countries dependent on external financing, along with increased energy costs, as oil is denominated in dollars. A more volatile geopolitical environment hasn’t helped: Global tensions and increased trade rhetoric have contributed to uncertainty, as China and the US risk an escalating trade war, and President Trump and Turkey’s Erdogan continue to engage in a war of words.

When emerging markets decline, the risk of contagion escalates. One of the most notable examples of this is the 1997 Asian financial crisis, which began with a currency crisis in Thailand that quickly spread throughout Asia, and then to Russia and Brazil. The speed with which this crisis spread to other countries led to a proliferation of research on the linkages between economies and the risk of financial contagion. One such study, Financial Crises and Contagion in Emerging Market Countries,1 presents a framework we can use to evaluate the current environment.

The authors presented three reasons why crisis may occur in countries simultaneously: coincidence; a common shock to economies across countries; and a financial crisis that causes a contagious loss of confidence in local financial markets. Examples of common shocks include the Gulf War, the Tiananmen Square protests, and the September 11 terrorist attack. Examples of financial crises resulting in contagion include the US stock market crash in 1987, the Mexican peso crisis in 1994, and the Asian financial crisis in 1997.

The authors cite four models to explain the causes of contagion: economic linkages, poor economic fundamentals, lack of liquidity, and herd behavior. The first model, economic linkages, examines the trade and investment links between the country experiencing crisis and its trade competitors. Based on current information, this model doesn’t predict a high probability of contagion now, but a potential crisis likely would start with Turkey. If this occurred, linkages between Turkey and other vulnerable countries probably would be limited. Although Turkey has significant trade partnerships with China, Russia, and India, they represent only a small portion of these countries’ overall trade. Additionally, Turkey only accounts for less than 1% of the world economy, and global exposure to Turkish banks is limited. Spanish banks are the most exposed, yet still comprise only a small portion of total assets.

The second model theorizes that investors will ignore poor economic fundamentals in some countries until a crisis occurs. However, once they become aware of the crisis, investors will project the problems of the country in crisis onto other countries facing similar issues. Again, this seems to be a weak argument for the current situation evolving into contagion. The issues facing Turkey appear to be country specific. Turkey has been a huge borrower in recent years, with more than half of its borrowing being denominated in foreign currencies; however, private companies have accumulated much of this debt. Other countries, such as South Africa and Argentina, carry large current account deficits but have less domestic debt, whereas Eastern European countries have strong external balances, low inflation, and strong banking systems.

The third theory is that liquidity-constrained portfolio managers will sell other countries’ debt to meet an expected increase in redemptions. After 18 weeks of consecutive inflows earlier in the year, emerging markets have reversed course and have had months of outflows, indicating that liquidity could become an issue. However, the magnitude of flows to date has been contained, relative to the overall market.

The final model for emerging markets contagion is herd behavior. This widely accepted theory states that investors will abandon markets based on what they think other investors are doing, and in the current environment, could be the most likely cause of potential contagion. To date, the broad-based sell-off seems to be based more on investors’ fear that other countries in a poor financial position will follow in Turkey’s footsteps. Based on fundamentals, these fears may be unfounded, as Turkey’s problems appear unique to Turkey, and the overall financial position in emerging markets countries is much stronger than in past crises. Unfortunately, contagion based on herd behavior can be difficult to predict, and comes with limited prevention options.

Overall, some risk exists that the current problems in emerging markets, and in Turkey specifically, could deteriorate into contagion, with herd behavior being the most likely cause. However, this is both difficult to predict and far from certain. Historically, large declines have been followed by large gains in the asset class, making it potentially attractive. Given this uncertainty, investors should carefully evaluate their exposure to emerging markets. Rather than avoiding the asset class, investors should consider emerging markets exposure in a total portfolio context, focusing on how it relates to their goals, risk tolerance, and time horizon.